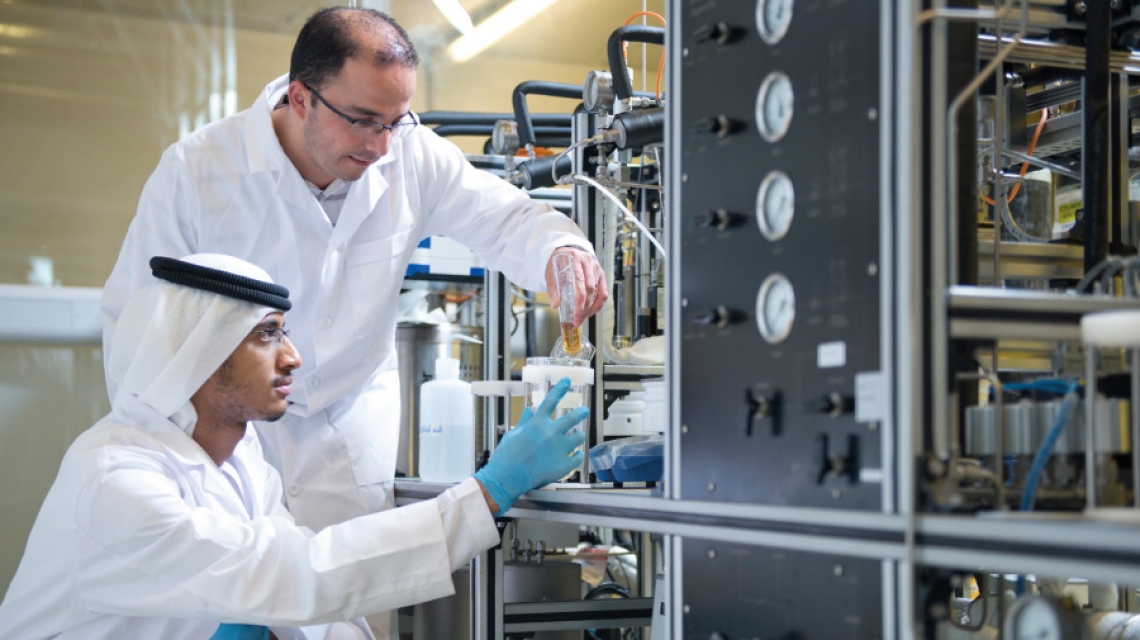 The fossil fuel fired power plants that produce over 85% of the world’s energy may not be going away anytime soon, but the harmful carbon dioxide (CO2) they emit into the atmosphere might, according to a team of scientists at the Masdar Institute who are working to make innovative carbon capture utilization and sequestration (CCUS) technologies easier, more affordable and even profitable.

The team is looking to capture CO2 emitted from coal- and natural gas-fired power plants, and convert the harmful gas into sodium bicarbonate, also known as baking soda, using a locally-produced waste – the brine produced by thermal desalination plants.

The UAE supplies over 95% of its freshwater from desalination, a process that produces tons of brine. When this excessively salty water is dumped back into the sea, it increases the ocean’s salinity and wreaks havoc on the marine ecosystem. Instead of releasing this reject brine back into the ocean, Dr. Abu Zahra and his team want to use it to both reduce the country’s CO2 emissions and produce sodium bicarbonate – a commodity chemical with a global market value above US$2 billion.

The team designed a lab-scale CO2 scrubber system, mixing varying amounts of brine with different amines – chemicals that bind with the CO2 – to determine which combination would produce the highest yield of sodium bicarbonate.

Different amines were tested to determine which one would react best with brine to convert the CO2 into sodium bicarbonate. The amine known as 2-amino-2-methyl propanol (AMP) proved to be the most efficient, which means that it solidified more of the sodium ions in the brine and CO2 mixture, producing more sodium bicarbonate.

As CO2 reacts with the ions from the sodium in the brine and the amines, it turns from a harmful gas into a benign solid. That is why speeding up this precipitation is key to more efficient CO2 removal.

With these positive research outcomes, Dr. Abu Zahra is collaborating with researchers from UAE-based Engineering Solutions Minerals (ESL) to develop next-generation CCUS technologies that are more affordable and efficient than the commercially available post-combustion capture technologies used today, which cost power plants 20-40% of their energy to operate the capture systems.

Device could save 95% of water across UAE mosques - The National