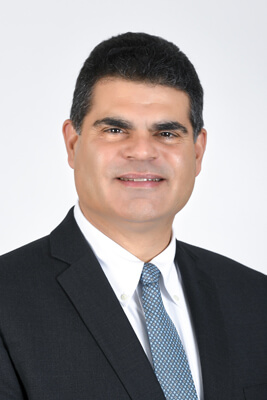 Dr. Robert L. Hernandez, Jr., M.D. joined Khalifa University in November 2018 as the Founding Associate Dean for Academic Affairs where he helped establish the College of Medicine and Health Sciences (CMHS) and serves as its Chief Academic Officer. The CMHS is distinguished as the first four-year, post college M.D. program in the UAE and the first medical school in the capital city of Abu Dabi. The CMHS follows the model of accredited medical schools in the North America. In his role as Associate Dean for Academic Affairs, Dr. Hernandez oversees undergraduate medical education, clinical skills and simulation training, faculty affairs, the Falcon Learning Communities, and the medical library.

Dr. Hernandez graduated with a B.S. in Biology from the Johns Hopkins University in 1986. He earned his M.D. at Tulane University School of Medicine in 1990 and completed his residency training in Internal Medicine at Tulane in 1993. He has been twice certified by the American Board of Internal Medicine and is currently certified by the National Board of Physicians and Surgeons. After completing a year as Chief Resident in Internal Medicine and a Clinical Instructor at Tulane, he joined the University of Miami School of Medicine (UMSM) in 1994 as an Assistant Professor of Clinical Medicine. At UMSM he was involved in undergraduate, graduate and continuing medical education. He served as an instructor and clerkship director, held a number of decanal positions in medical education and student affairs, and played integral roles in curriculum reform and the development of a regional medical campus. As evidence of his long-standing commitment to fostering professionalism, Dr. Hernandez helped pioneer a comprehensive professionalism program at UMSM designed to monitor, evaluate and improve the professional behavior of medical students. He has presented the program to national and international audiences of medical educators. In 2003 he was inducted into Iron Arrow, the highest honor attained at the University of Miami, and in 2005 he was inducted into the Alpha Omega Alpha Honor Medical Society. In 2008 he was promoted to Associate Professor of Internal Medicine.

Joining the Herbert Wertheim College of Medicine in November 2011 as Associate Dean for Student Affairs, Dr. Hernandez greatly expanded medical student programs and services provided by the Office of Student Affairs. Dr. Hernandez joined the Dean's executive administrative team in July 2013. As the Executive Associate Dean for Student Affairs, he was responsible for all functions of the Office of Student Affairs, including recruitment, admissions, diversity and inclusion, grades and records, financial aid, medical alumni relations, health and wellness, professional development, career guidance, and student activities and organizations. Under his leadership, applications for admission to HWCOM increased by over 40% from 2013-2017, exceeding 5,000 for the first time in 2017. HWCOM also recruited one of the most diverse student bodies in the nation. He oversaw the development of a professionalism advocacy program, introduction of four signature programs in the Panther Learning Communities, and creation of the HWCOM Medical Alumni Network. He assisted in the development of collaborative programs with the FIU Honors College, the FIU College of Business, and the FIU Graduate College. In 2017, Dr. Hernandez was named an FIU Top Scholar in recognition of his achievements in medical student affairs.

Dr. Hernandez has achieved international recognition and standing in medical education. He has given more than thirty presentations at regional, national and international meetings of medical educators. From 2008 to 2012 he served as an officer of the Southern Group on Student Affairs (GSA) of the Association of American Medical Colleges (AAMC). He served a five-year term as an officer with the National GSA Steering Committee of the AAMC from 2012-2017. As a member of the GSA Professional Development Initiative Constituent Advisory Group, he helped envision and launch a program designed to advance the professional development of medical student affairs officers. In 2016, he received the Robert “Bob” Sabalis Award for Exemplary Service from the AAMC Southern GSA.