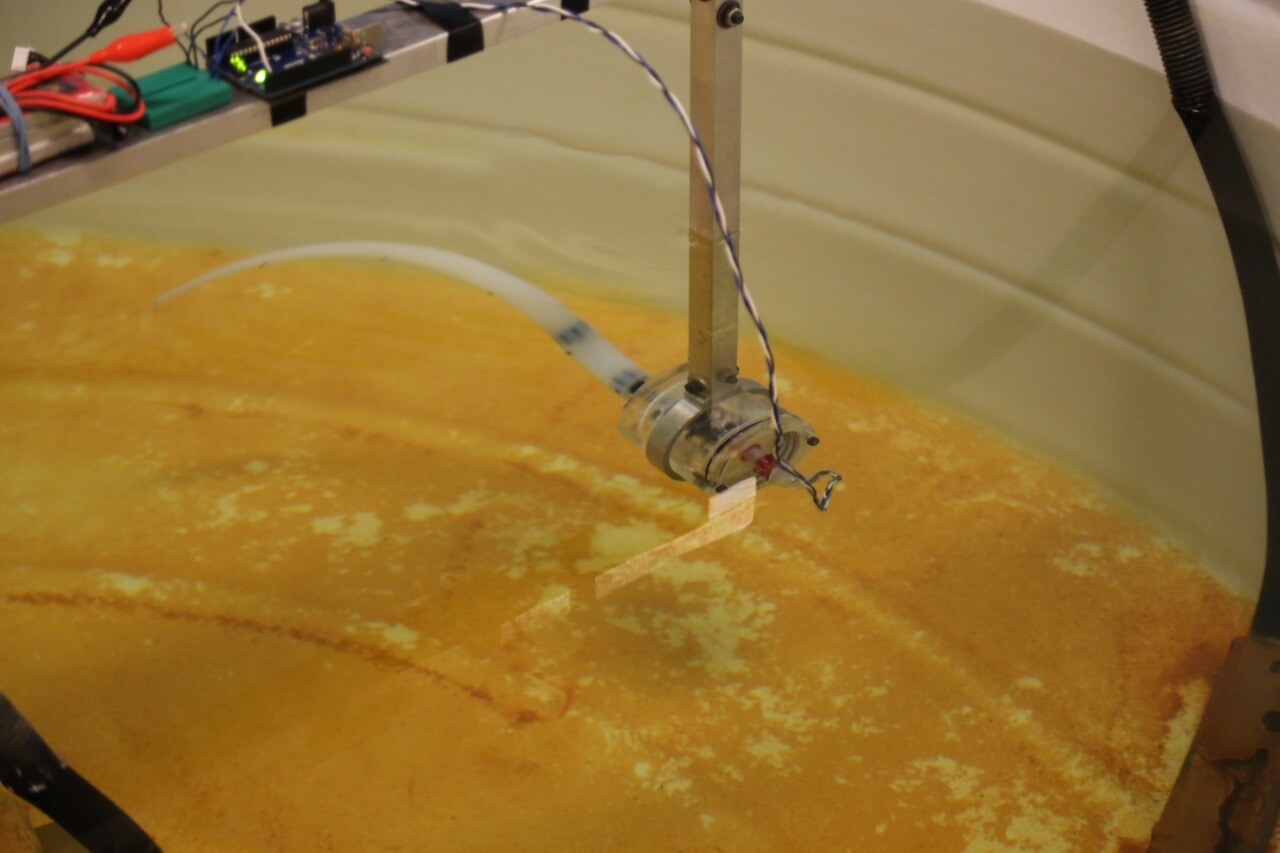 The robots used today to inspect and repair the world’s most critical underwater infrastructure, from sea-floor water pipelines and electrical power cables to offshore oil drilling platforms and submarines, could use serious improvement. Most commercial underwater robots are bulky and rigid, restricted to travelling only in open stretches of the sea, and sometimes even wreak havoc on sensitive equipment when they navigate too close. Soft robots – a new branch of robotics that deals with highly flexible robots made primarily of soft, compliant materials – would offer a much better solution for complex underwater tasks.

That is why a team of researchers at Khalifa University, led by Dr. Federico Renda, Assistant Professor of Mechanical Engineering, are developing a soft multi-robot system designed to maneuver safely and efficiently in hard-to-reach underwater spaces, such as coral reefs and oil and gas pipelines.

The researchers drew inspiration from the bacteria E. Coli, which use flagella – slender threadlike appendages – to move seamlessly through fluids. The soft robot physically resembles the hook-like structure of a flagellum and moves in a similar whipping motion. It even mimics the intracellular motor that flagella use to propel forwards, making it capable of continuous locomotion. In fact, it is the first soft, modular, and continuously rotating appendage ever proposed in the field of soft robotics.

The flagellum robot is made from different types of silicone – a rubber like material – and is fabricated through injection molding, a manufacturing process for producing parts by injecting molten material into a mold. Other parts of the robot were made with 3D printing. Both injection molding and 3D printing allow for economical mass-scale production, contributing to the robot’s commercial viability. The silicone material makes the robot inert to salt water, and provides a natural waterproof insulation for the robot’s internal components. Each robotic flagellum is around 30cm, or the size of a water bottle.

Another advantage of the robot is that its soft, rubbery composition allows it to directly latch on to sensitive structures, posing little to no risk of damaging them. This capability would make the robot significantly more useful for performing maintenance and other forms of intervention in unstructured environments.

The robotic flagellum’s unique whip-like shape and soft body, coupled with a small rotating motor, enables it to propel the robot just by passively exploiting its structural elasticity. This means that as the robot’s motor rotates, water is pulled in causing the robotic flagella to move in a helical shape, thrusting it forwards through the formation of helical traveling waves. This is in essence the ‘bioinspired propulsion system’ that allows the robot to move continuously with great efficiency and robustly against different water flow conditions.

“The main benefit of our approach is that we are able to combine the advantages of a traditional propeller – which employs a simple actuation mechanism – with soft-bioinspired robots that adapt to the environment and are easily maneuverable, noiseless and safe, potentially giving rise to a novel class of underwater robots able to effectively navigate the ocean world,” explained Dr. Renda.

Building on their expertise from developing individual flagellum robots, the team aims to design a complete multi-flagella robot system that is adaptable and energy efficient, with great durability and maneuverability, capable of performing seamless monitoring and intervention in extreme marine environment. Each flagellum will be capable of performing both latching or grasping and propulsion, enabling the robot to maneuver strategically and safely. The team plans to equip the multi-flagella robot with high resolution cameras and water monitoring sensors.

Until now, the team has tested each flagellum robot by tethering it to a cantilever and watching it swim in a controlled circle in a 2-meter frame pool. But now, they are preparing to test the first untethered prototype of the multi-flagella robot in the larger wave tank, which is currently under construction in the Marine Pool Lab.

“We plan to perform soon the first trial of free swimming tests, wirelessly controlling the direction and the speed of the robot,” shared Dr. Costanza Armanini, one of the postdoctoral fellows working on the project.

Dr. Armanini also explained how the team is refining the analytical model which they use to predict how different designs and constituent materials will affect the flagellum robot’s locomotion and latch capabilities. The model is helping the researchers optimize the design of the propulsion system, in order to improve the robot’s overall performance.

The research is beginning to garner a significant amount of interest in the international scientific community. Dr. Renda presented some of the results at the recent IEEE RoboSoft Conference, which took place in Seoul, South Korea in April. The team has recently filed an invention disclosure on the novel robot, and plans to submit a paper on the research in a leading journal soon.

Giving Robots a Sense of Touch

Exploring the Transformative Potential of Robotics