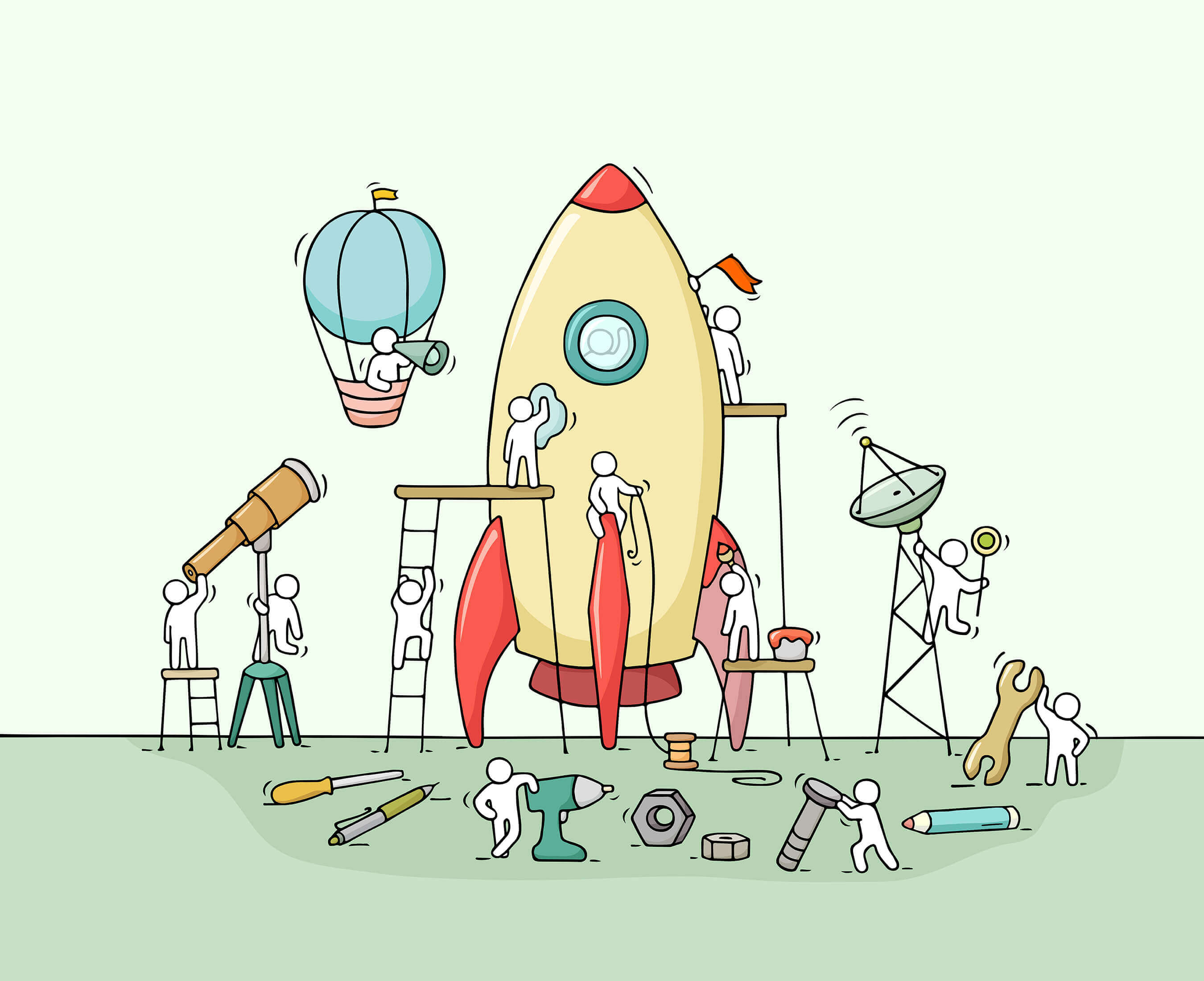 One of the issues facing further space exploration and the ambitious goal of colonizing Mars is whether the world will have the workforce needed to achieve it. The issues range from short-term concerns about the current workforce’s skills for developing and building new spacecraft, to long-term concerns about recruiting, training and retaining scientists and engineers for work in both industry and academia. To achieve the long-term vision shared by Space Agencies around the world, it’s clear there’s a personnel shortage and skills gap.

The skills and qualifications gained through academia and research have many applications: there is no immediate shortage of skilled scientists and engineers to drive the UAE’s space economy. However, there are also differing interpretations of future requirements for certain skills and an absence of information correlating levels of expertise required with the numbers of employees anticipated to be needed. By the time this is resolved, and Space Agencies are ready to hire, much of the workforce that could be recruited will already be engaged in the overall aerospace industry, potentially loathe to refocus on a different application for their talents. In the United States, The National Aeronautics and Space Administration (NASA) represents only a fraction of the overall aerospace workforce and must compete directly with numerous other government agencies, industry and academia for appropriately skilled workers. Many of the engineers who work on NASA projects are in industry, and many of the scientists are at universities: attracting and retaining the proper numbers of workforce poses a fundamentally difficult challenge. For example, engineers in industry generally have to rely less on government funding, such as that from NASA, for the long-term financial stability of their projects than scientists in universities. Science talent might be lost and not readily regained if organizations such as NASA withdraw support for specific research even for a limited period and scientists leave the field or are unwilling to return to NASA-sponsored work where funding has proven unstable in the past. There’s plenty for the UAE to learn from NASA’s experiences.

Additionally, over the last few years, the average age of NASA’s workforce has marched steadily upwards—a natural trend for a well-established Space Agency valuing experience. The agency now has a relatively low number of younger workers to assume future leadership as older workers retire; risking a gap in technical leadership and in technical experience as highly skilled workers with experience in the different programs retire. To address this, NASA has been investing in education and training students to design and build satellites and satellite instruments.

This is where educational institutions can step in to build a space workforce for the future and where Khalifa University is leading the way.

How are UAE educational institutions working to build a workforce?

“Khalifa University has identified space as a core area of R&D development,” said Dr. Steve Griffiths, Senior Vice President for Research and Development at Khalifa University, at the Global Space Congress 2019. “Space technology and space science are areas we aim to develop as part of our R&D strategy. The goal is to establish education and research programs that align directly with the aims of the UAE Space Agency for the development of space technologies, as well as the Mohammed Bin Rashid Space Center (MBRSC) for the development of capabilities that support the UAE efforts in space science.”

How can academic institutions best work with industry to ensure graduates leave with the necessary skills to excel?

“For KU, a key goal is linking graduate education with industry needs so students get both classroom understanding and hands-on training, which is very important,” said Dr. Griffiths. “Students need to understand mission design and planning as well as spacecraft subsystems. The ability to analyze and work with satellite data is also an important capability.

“We have projects being carried out at the YahSat Space Laboratory and we are also working with the UAE Space Agency and MBRSC for both satellite technology development and satellite data analysis,” Dr Griffiths told the Congress. “We ultimately plan to leverage the work with the UAESA and YahSat to expand our space sector R&D and build a research center that initially designs, builds and launches Cubesats, and further provides advanced technology development capabilities for large satellite components. Additionally, we aim to launch a Space Science Center that will support MBRSC in analyzing data received from the Mars mission Hope Probe. The work done will help train the next generation of scientists that will take the UAE a step further in Mars exploration.

“Our Msc concentration in Space Systems and Technology was jointly developed with Yahsat and Northrup Grumman (originally Orbital ATK): as part of the concentration, the students undertake a series of three lab courses that are carried out in our YahSat Space Lab in addition to their coursework on spacecraft systems and design,” explained Dr. Griffiths. “The YahSat Space Lab is the first of its kind in the region with the capability to design, build and test small satellites. A total of 18 students have graduated from the program so far, and currently 23 students are participating—including four students from Bahrain—through a collaboration agreement between the UAE Space Agency, the Bahrain Space Agency, and Khalifa University, where 10 students will be trained on space systems development here at the University.”

“When people started working on Cubesats in the early 2000s, they were entirely intended to be educational. Some of these tools are so good that they’re starting to take over some predictive capabilities and adding value. Sometimes a tool, that looks like a gimmicky small thing, can become a very important tool for forecasting.

“It’s not just space travel or exploration; it’s building methods to look after us here on Earth. Don’t believe people that tell you we know everything about our world; we’re learning a lot still. Most of nature we don’t know. That’s what’s so exciting about research: many things are being discovered now.”

Telling stories from previous space exploration successes and the grit and determination it took to achieve them can go a long way in inspiring students to stick with their dreams of venturing into space. Building motivation from an early age will see a committed workforce for the future—helping students find their passion in space science.

Encouraging students to participate in competitions and events with real-life applications also aids in motivating retention, while preparing students for the challenges they will face working in the space sector.

“In collaboration with Khalifa University and Boeing Corporation, the UAE Space Agency has devised a STEM-oriented contest called the UAE Mini Satellite Challenge: Design, Build Launch,” said Dr Griffiths. “This Challenge provides the opportunity for students interested in the fields of engineering, material sciences, and physical sciences to develop technology applications and experiments that are exposed to the space environment and have a clear view of the Earth and universe. In the first edition, 21 teams participated with over 150 UAE national students involved. The payload proposed by New York University Abu Dhabi to detect terrestrial gamma ray flashes won the first prize; NYUAD and KU teams are now working together to realize the mission by developing the payload and the bus. The first satellite is expected to be launched in early 2020.”

Competitions like this also highlight and develop the soft skills needed to succeed in any area of science and engineering, particularly teamwork and leadership. Dr. Zurbuchen told the story of the James Webb Space Telescope during his speech at KU: the telescope will be the successor to the Hubble Space Telescope and will be tasked with observing some of the most distant events and objects in the universe, such as the formation of the first galaxies. It was meticulously designed and scrupulously built—for the most part. The technicians putting the telescope together put the screws in the wrong way, costing NASA close to USD$400 million. “One thing you need to learn if you work on something like this, is you need to respect the person who touches the hardware. They need to work with the same commitment as you,” said Dr. Zurbuchen. “If they do not, your vision may be great, but you will never launch the spacecraft. Sometimes, leadership is where the action comes from. Get that commitment that you have into your team so you can achieve your vision.”

The UAE Space Agency is focused on raising national capabilities and the use of space technology in the UAE, looking proudly towards the future of the UAE as a leader in space. The Agency also hopes to inspire future generations for the benefit of the nation and humankind—and can only do so with collaboration from the universities and academic institutions on the ground.

What we learned from the Mars rover Opportunity