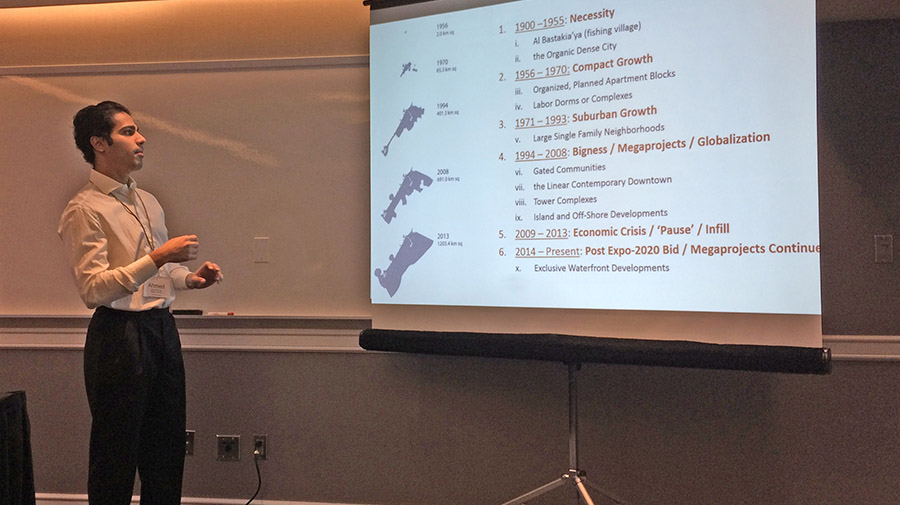 Understanding the impact of various design parameters on UAE neighborhoods – including their infrastructure, housing, transport options and energy and water demands – is the first step towards developing new, more sustainable designs for healthier, low-carbon neighborhoods in the region, Masdar Institute PhD student Ahmed Almulla highlighted in his address to the Association of Collegiate Schools of Planning (ACSP) Annual Conference last week in Portland, Oregon, USA.

The team is analyzing the evolution of built landscapes and policies in Dubai’s Emirati neighborhoods – which are government subsidized neighborhoods developed exclusively for UAE Nationals – with the aim of creating enhanced urban forms that will deliver greater environmental, social and economic coherence. Urban forms include the physical patterns, layouts, and structures that make up an urban area.

“Emirati neighborhoods account for 15% of Dubai’s urban area. This housing stock is primarily driven by government policies and market forces, rather than by sustainable planning solutions, such as mixed densities, diversity and land-use mix, pointing to the critical need to implement alternative neighborhood typologies that are more ecologically and socially sensitive,” Almulla said.

In order to design alternative, sustainable neighborhood typologies for Emirati neighborhoods, Almulla and Khanal first analyzed the current classification of characteristics and created a classification index. They did this by conducting a built landscape-oriented analysis to understand how the built environment impacts things like vehicle use, walkability, energy demand and other important sustainability factors in a neighborhood.

This type of analysis has not been done in the UAE until now, and the research team expects that their findings will guide planners and policy makers to design alternative, more sustainable neighborhood models for cities in hot, arid regions, like Dubai, Abu Dhabi, and other cities in Gulf Cooperation Council (GCC) countries.

With tools like Geographic Information Systems software, the team mapped spatial and morphological patterns – including building profiles and road networks – for eight Emirati neighborhoods in Dubai. These quantitative measurements help to facilitate comparison between neighborhoods and aid analysis of how different morphological attributes affect different aspects of sustainability, such as connectivity, accessibility, and efficient utilization of lands.

The team then conducted an Urban Network Analysis (UNA) of the neighborhoods, producing a visual analysis of densities, distances between, and accessibilities to buildings. That analysis, coupled with the quantitative measurements of the buildings and roads, provides an integrated approach to assessing the neighborhood’s urban form and infrastructure.

Additionally, the researchers performed another type of analysis to determine which streets in a neighborhood were the most integrated, requiring the fewest turns to reach all other streets or destinations, and which streets had the lowest depth distance (those streets that are nearest to all other streets), in order to identify an optimal road network for the neighborhood.

These elements are now being evaluated to identify those physical attributes that are positive and influence neighborhood sustainability and should thus be incorporated into the new sustainable neighborhood design.

“We are still in the process of constructing indicators and modules based on our analysis of the existing urban form, which combines quantitative and qualitative data in order to create a framework, or urban development tools, for which to guide the design of sustainable neighborhood prototypes,” Almulla explained. His research views sustainability as the integration of qualitative and quantitative factors and metrics reflecting the study of real urban problems in real places.

The next steps include using a scenario planning tool called “Envision Tomorrow” to guide the design of new neighborhoods and test the neighborhood models for maximum efficiency, lower emissions, and greater feasibility.

The ACSP Annual Conference attracts more than one thousand planning and urban design scholars from among the top planning faculty across the world, along with a substantial group of doctoral students and practitioners seeking knowledge and scholarship. The prestigious conference provided Almulla and by extension, the entire Masdar Institute research team involved in urban planning-focused research, the opportunity to receive constructive feedback from top scholars in the field.

This project is one of many being conducted through MI’s MSc in Sustainable Critical Infrastructure program aimed at transforming UAE’s urban centers into sustainable, walkable, and environmentally friendly areas to promote better health and socioeconomic well being.