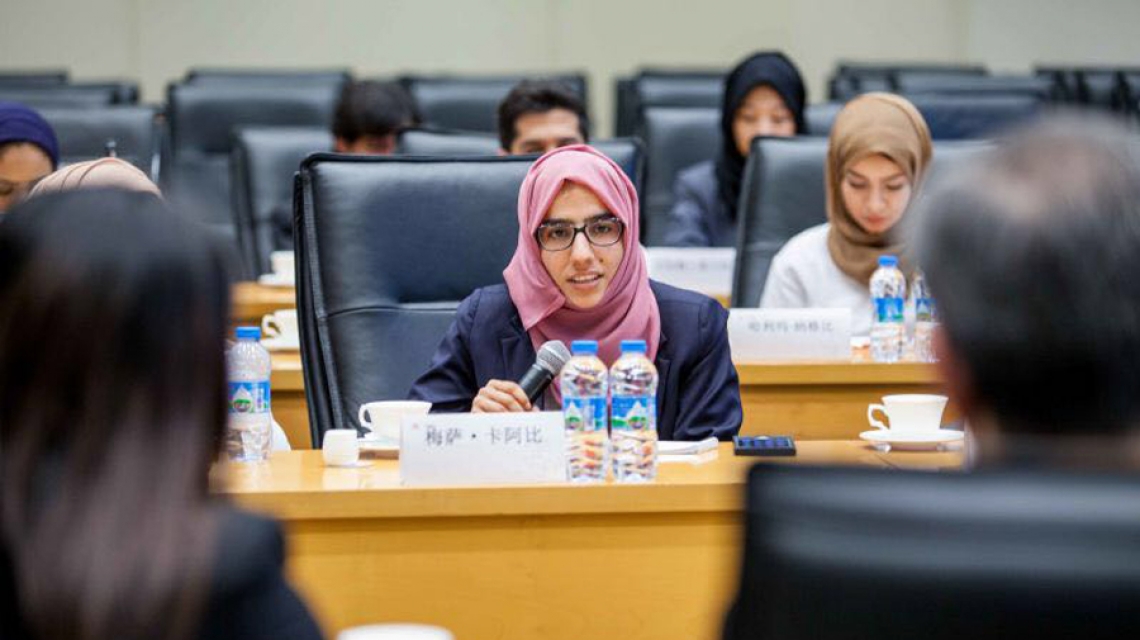 Masdar Institute Class of 2012 graduate Maitha Al Kaabi has put her own spin on the traditional Arabic saying of “Seek knowledge even unto China” in her pursuit of professional and personal challenges that have taken her to the Far Eastern nation.

“The move to China, where I am the energy and climate change attaché at the UAE Embassy in Beijing, has been the most exciting experience I’ve had has since graduation. China is an extremely challenging place for foreigners to live, as the language, mindset and culture are very different. But I have been here since 2013 and have loved it. I feel so lucky,” Al Kaabi shared.

While the diplomatic posting has been a good fit for Al Kaabi, it was definitely not part of her original plan when she joined Masdar Institute in 2010 as a student in its MSc in Water and Environmental Engineering Program. At that time her research focus area was water treatment and desalination and she was interested in environmental conservation, but she sees her diplomatic work as a continuation of her desire to explore her abilities and opportunities in pursuit of excellence.

During her studies at Masdar Institute Al Kaabi was also a member of the 16-day International Antarctic Expedition (IAE) 2012 led by polar explorer Robert Swan, which culminated with her and fellow student Reem Al Junaibi planting the UAE and Masdar Institute flags at the South Pole. Al Kaabi also traveled to Brazil in 2012, where she represented the Young Future Energy Leaders (YFEL) program at the RIO+20 United Nations Conference on Sustainable Development Summit.

“I like to challenge myself and to experience new things in life. When the opportunity arose to work in the embassy to help strengthen the relationship between the UAE and China in the areas of energy and climate change, I saw that it offered me the chance to use my technical skills in a non-technical setting while allowing me to explore new and unfamiliar situations,” Al Kaabi shared.

And while Al Kaabi’s work as a diplomat may seem a far cry from her training as a water and environmental engineer, she explained that her technical background shapes and enriches the way she approaches her professional tasks. She also regularly uses the communication and negotiation skills that she developed during her time at Masdar Institute.

“As a student at MI, I was often put in the new position of having to explain my ideas or work with others from a wide variety of backgrounds and mindsets, whether when presenting my research to fellow students or professors, or explaining to visiting VIP delegations the importance our water research. As a diplomat, these communication skills have been an asset in my work, allowing me to quickly adapt to my role. They help me tailor my language depending on whether I am speaking to a technical expert from the energy industry or to a foreign or local political leader,” Al Kaabi shared.

In her work as attaché, she says she is most proud of helping to facilitate bilateral discussions between the UAE and China that led to a USD10 billion commitment by the UAE and China to invest in infrastructure and energy, including a significant allocation for clean energy.

“I believe I have contributed to changing the way China thinks of the UAE. Before, China may have seen the UAE only as a source of oil, but now, China also sees the UAE as a hub for clean energy advancement,” Al Kaabi said.

The UAE is reportedly China’s second largest trading partner and largest export market in the Middle East and North Africa region, with bilateral trade estimated to reach US$60 billion in 2016. In 2015 the countries signed a Memorandum of Understanding that covered collaboration in research and development focusing on renewable energy power generation.

For her future professional endeavors Al Kaabi says she wants to continue to contribute to the UAE, whether as a diplomat or in any other needed capacity, and hopes to help pave the way for young women in the UAE to achieve greater successes.

“I hope my work encourages more young females to represent the UAE in international settings. We need to trust more in females’ capabilities. I want people to remember that when a woman makes a mistake at work, it is because she is human and is susceptible to the same shortcomings that all humans are, and not because she is a woman,” she said.

Al Kaabi advises students and alumni to be bold and adventurous in choosing their professions, so they can continue to learn about themselves and the world around them. Trying new things can help them find out where they may be best suited to contribute to their community and goals.

“I suggest graduates to be open to the world of opportunities before them, to open their minds and hearts. It will take time to learn exactly what you want to dedicate yourself to, and whether male or female, you need to explore what this world has to offer to find where you fit into it,” she shared.