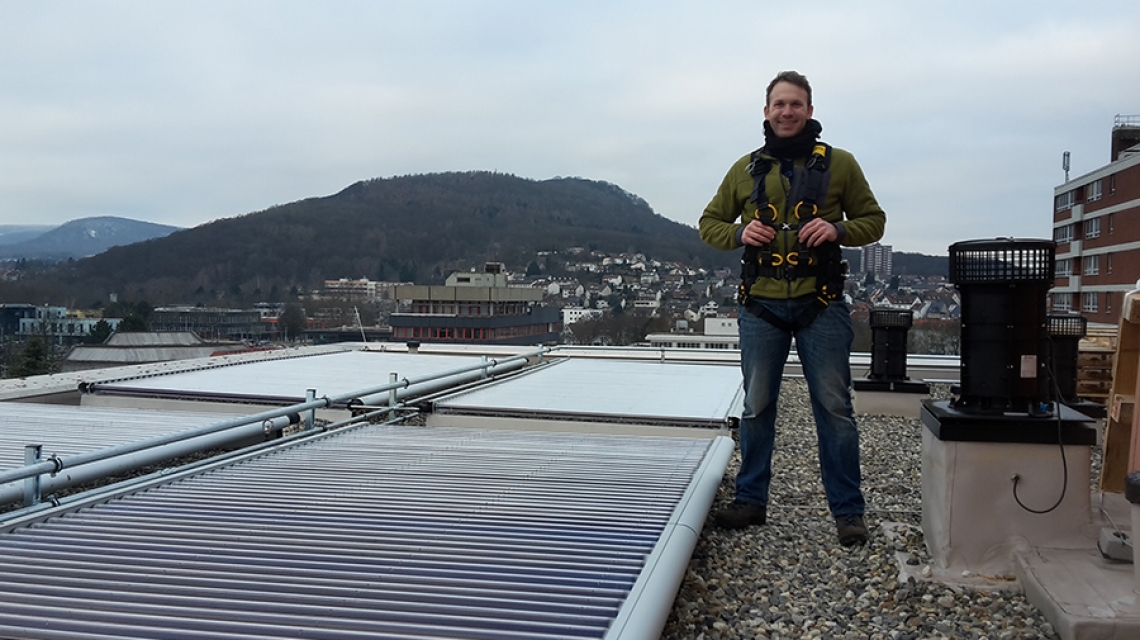 Steven Meyers, a Masdar Institute Class of 2011 MSc in Mechanical Engineering graduate, has followed his graduation with a steady pursuit of excellence and advancement of his sustainable engineering credentials and today is working to reduce the world’s carbon footprint by studying how renewable energy systems can replace traditional fossil fuel sources for industrial process heating applications.

Meyers had joined Masdar Institute’s first class after already having completed a BS and MSc in Mechanical Engineering from Penn State University and today his pursuit of specialized education in renewable energy has taken him to the University of Kassel in Germany, where he is completing a PhD in Solar and Systems Engineering. His doctorate research is focused on the integration of solar and renewable heating systems for industrial processes to minimize fossil fuel use and carbon emissions.

Process heating – which provides the hot air, steam and water needed to carry out processes such as drying, washing, pasteurization and sterilization found in the food and beverage, textile, brick, paper, metal fabrication, and agriculture industries – can significantly contribute to high levels of atmospheric carbon dioxide – the primary greenhouse gas responsible for global warming. In the United States alone it accounts for over 35% of the energy consumed by the national manufacturing sector. That is why Meyers has dedicated his professional life’s work to finding ways to reduce carbon dioxide emissions from process heating by replacing fossil fuel-driven heating systems with renewable technologies, such as solar thermal, PV, and/or heat pumps.

“I became interested in low carbon industrial process heat because it is a ‘sleeping giant’ in terms of potential for greenhouse gas reduction. The global demand for heat is on par with that of electricity, though it is rarely recognized as a way to reduce emissions. By combining this need with my experiences as a solar engineer, I plan to realize renewable heat projects in an industrial setting after I finish my PhD later this year,” Meyers explained.

Despite the technical feasibility and socio-economic benefits of using renewable heat in industrial processes, actual deployment levels remain quite low.

“This is one reason why I am working to develop renewable heating technology integration guidelines to enable greater adoption of renewable heating plants in both existing and new industrial plants,” Meyers commented.

Meyers’ determined efforts to increase the development of renewable energy have been repeatedly recognized, and these achievements can be attributed to the complementary blend of skills, experience and specialized knowledge gained during his studies at Masdar Institute.

While at MI, Meyers was selected as a St. Gallen Leader of Tomorrow in 2010 and 2012, and in 2012 he earned a spot on the prestigious Forbes “30 under 30” list. He has also published over 5 papers on his research for international journals. More recently, Meyers was elected to the Board of Directors of the International Solar Energy Society (ISES).

Meyers pursued his second Master’s degree from MI in order to gain specialized knowledge that would transfer into practical skills required for the renewable energy sector, focusing his thesis research on thermal and optical characterization of Masdar Institute’s solar beam down tower.

“When I arrived at Masdar Institute, I wanted to gain valuable experience in a specific renewable energy discipline because previously I was just a general mechanical engineer. During my two years in Abu Dhabi, I was able to learn a great deal about solar thermal energy, both in the classroom and in the field at the Masdar Institute Solar Platform, which is a concentrating solar power and thermal energy storage testing research facility. The skills I honed during my studies were quite valuable, helping me to secure job offers after Masdar Institute and my current PhD research position,” Meyers explained.

He is especially grateful for the guidance and support he received from his advisors at Masdar Institute, Associate Professors Dr. Peter Armstrong and Dr. Matteo Chiesa, commenting that “they were instrumental in helping me start my career in solar and renewable energy.”

After he graduated from MI, Meyers had a brief stint at Areva Solar in California as a controls engineer.

Following that, he was a solar engineer at Saudi Aramco for two years, where he worked to develop concentrating solar power (CSP) technologies for the state-owned oil company. He also worked as a visiting scientist at Sunvapor in California, where he contributed to the development of solar steam and heating systems for industrial process heat demand.

A self-described ‘lifelong sustainability champion’, Meyers says his studies and experiences at MI helped transform his passion into actionable skills and insights. He is now proud to be applying and advancing those foundational abilities and insights to make energy-intensive manufacturing processes more sustainable.

Frontiers: Abu Dhabi's coral gets help from high up - The National