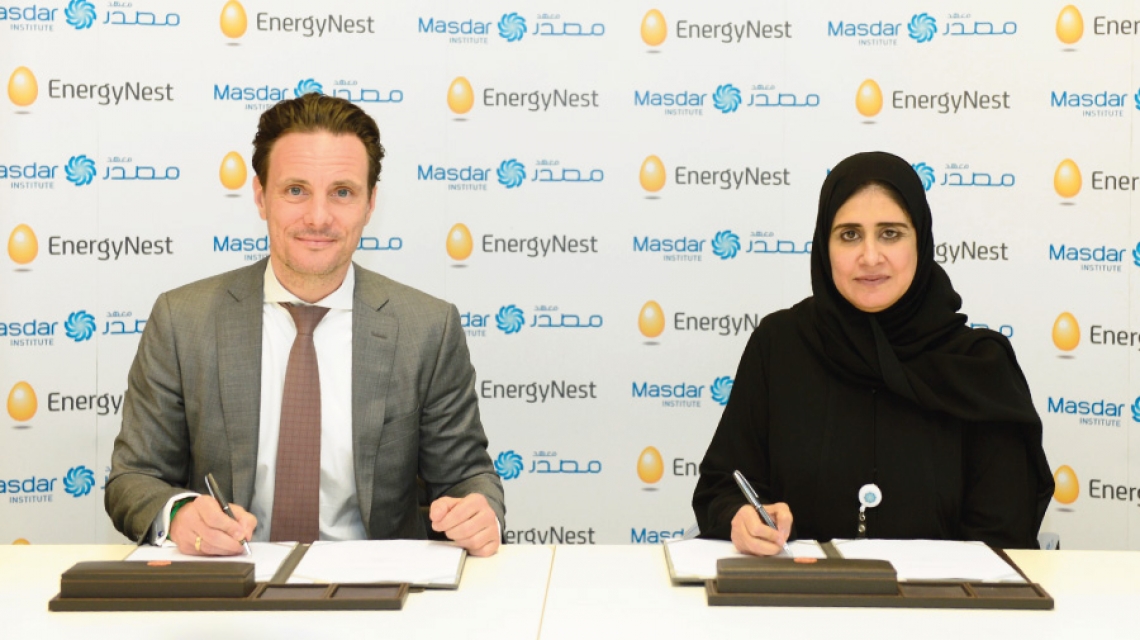 Masdar Institute and Norwegian company EnergyNest AS have signed an agreement to further intensify research on the thermal energy storage (TES) pilot facility at the Masdar Institute Solar Platform (MISP).

The agreement paves the way for the partners to appoint support personnel and ensure round-the-clock operation of the TES pilot facility. Such continuous operation will help achieve thermal cycling milestones that are required for further analysis so that improvements could be introduced through upgrades. In addition, the charging and discharging of the storage over many cycles will strengthen the credibility of the technology amongst commercial customers.

Dr. Al Yousuf said: “The agreement with EnergyNest to appoint support personnel further consolidates our efforts to lead research in solar energy technologies as directed by the UAE leadership. We believe the agreement will move the project to its next stage and expedite the process towards achieving sustainable solutions.”

Dr. Christian Thiel said, “We at EnergyNest are very pleased to continue our long-term relationship with Masdar Institute by extending and expanding our ongoing research collaboration efforts at our storage pilot at the Beam-down facility. We are very encouraged by the mission of Masdar Institute of bringing game-changing technologies to commercial maturity, and look forward to work together on that mission for energy storage.”

According to the agreement, EnergyNest will provide technical support funding for the team of seven engineers and technicians who will be working at the TES facility. The TES comprises two versions of the heat exchanger – Double-U (DU) and Pipe-in-Pipe (PiP) – which need to be long-term ‘cycled’ or tested. At present, only the DU module has been tested. Since the DU heat exchanger design is located closest to the EnergyNest commercial product, testing of this is being prioritized during 2016. The PiP module will be taken up later.

The support team has become necessary for EnergyNest to demonstrate its performance over many charge/discharge cycles, as, at present, there is no industrial benchmark for thermal energy storage systems to use as reference. Therefore, for a commercial TES with an expected lifetime of 30-plus years, it has become critically important for researchers to obtain as many cycles as possible within the shortest timeframe to demonstrate the technology’s stability and performance.

Dr. Calvet said: “According to our industrial partner EnergyNest, this system could be 30% to 70% cheaper than the conventional two-tank molten salt technology depending on the size of the storage. The pilot results are better than expected and now we need to confirm the results on a longer-term basis.”

In May 2015, Masdar Institute and EnergyNest successfully completed a comprehensive 2 x 500kWh EnergyNest-type TES project. Since then, performance analytics and operational data have been made available to industry and academia through scientific articles and published reports.