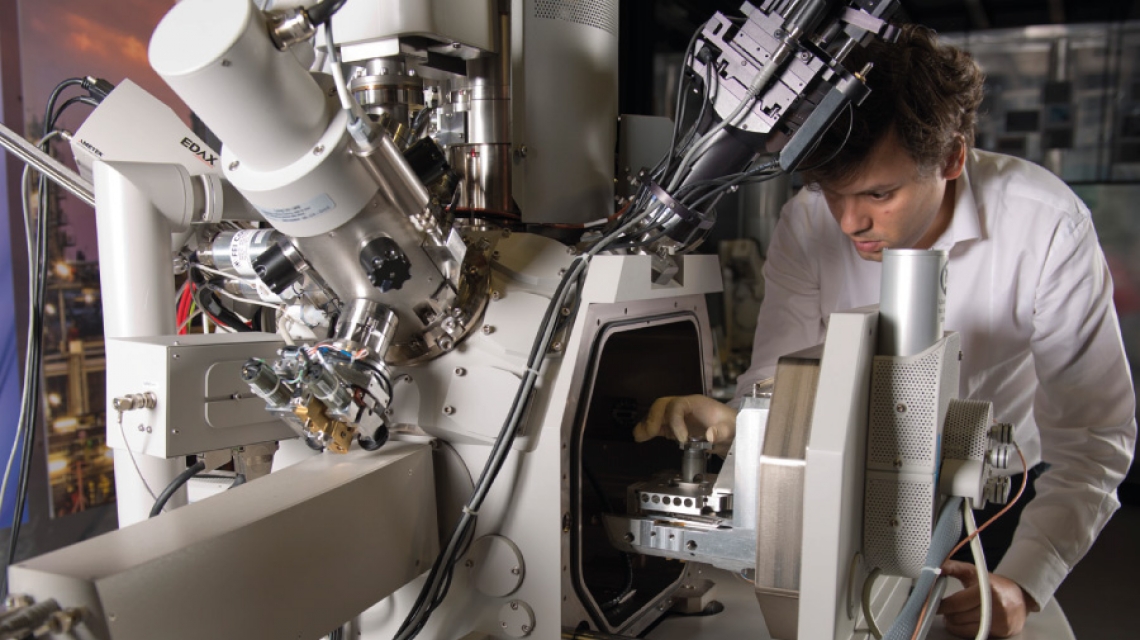 “Research in advanced materials is critical to the development of innovations that will play a significant role in the UAE’s key industries, including aerospace, oil and gas, and renewable energy. We are delighted that a significant number of our research projects were presented at this leading advanced materials research conference, revealing our strong capabilities in this critical area,” said Dr. Steve Griffiths, Vice President for Research, Masdar Institute.

Another paper presented by Madzik relating to transistors, titled “Impact of Glycerol on Zinc Oxide Based Thin Film Transistors with Indium Molybdenum Oxide Electrodes,” further investigated the development of transparent metal-oxide transistors with glycerol – a clear liquid that could improve the transistor’s transparency.

On the topic of water-splitting, Post-Doctoral Researcher Dr. Nitul Rajput presented the paper “Electron Beam Induced Rapid Crystallization of Water Splitting Nanostructures.” His research investigated using titanium dioxide loaded with gold to catalyze water splitting – the process of splitting water into oxygen and hydrogen, which could be used for energy storage and power production.

Also on the same topic, Dr. Viegas presented a paper titled “Comparative Study of Multilayered Nanostructures for Enhanced Solar Optical Absorption,” in which he describes how his team has made a significant step towards improving photon-to-electron conversion using multilayered nanostructures, which can be used in applications such as photodetectors, photovoltaics and solar water splitting.

Exploring wettability, which is interaction between a liquid and solid phase, PhD student Chia-Yun Lai presented the paper “Probing the Hydrophilicy of a Single DNA.” The paper described her team’s research into mapping DNA molecules’ tendency to repel water, which causes the water to form droplets. Their research could impact the study of biological processes where the role of water films and fluidity is critical, such as protein folding and protein−DNA interactions.

Lai also presented her team’s study of a group of polymers that can both attract and repel water in a paper titled “Amphiphilic Polymer Nanodomains for Anti-Fouling Coatings.” The team studied the exact size, in nanometers, of the patches of tight water droplets on the polymers, which can be used to better understand how bacteria attaches to certain wetted surfaces.

Also on the topic of wettability, Sohail Shah, a student of Masdar Institute’s Materials Science and Engineering program, presented a paper on his team’s research to increase the rate of condensation in power generation heat exchangers – where the steam that drives the turbine is condensed back into water to be used again – by applying graphene layers onto copper. His team’s paper is titled “Controlled Synthesis of Graphene on Roughened Copper Surface for Improved Heat Transfer.”

Dr. Chiesa presented a fourth paper on the topic, titled “AM-AFM Force Spectroscopy: a Framework to Evaluate the Time Dependent Wettability of Graphitic Surfaces,” which revealed his team’s research on the wettability of individual sheets of graphene, using a novel approach to study graphene’s nanoscopic layers.

In the area of solar cells and optical devices, Dr. Chiesa presented his team’s innovative research on a novel, low-cost solar optical device that both separates and concentrates sunlight in order to boost solar cell efficiencies, in a paper titled “Experimental Demonstration of a Dispersive Spectral Splitting Concentrator for High Efficiency Photovoltaics.”

PhD student Harry Apostoleris presented two papers relating to solar cells and optical devices. The first is titled “Polymer-Based Transparency-Switching Materials: Optical and Kinetic Aspects,” and explores the student’s development of a novel device that can track and concentrate sunlight onto high-efficient solar cells without mechanically moving to follow the sun’s path across the sky.

The second paper is titled “Nanoparticle-Based Coatings for Enhanced Solar Cell Performance in Desert Conditions.” In this paper, innovative research analyzes how nanoparticle-coated glass can help reduce the accumulation of dust on solar panels under real weather conditions in the UAE.

PhD student Md. Mahfuzur Rahman also presented a paper in this category, titled “Tunable Optical Properties of Carbon Nanostructured Surface,” on his team’s research to develop thin carbon nanotubes with low reflectivity, so that optical signals can be sent through the nanotubes more effectively.

Sensors are another key application of materials science research, and the Masdar Institute team presented three papers on this topic. Post-Doctoral Research Dr. Hammad Younes presented his team’s sensor research on the development of graphene films for sensor systems that can be used to sense scale deposition in oil and gas pipes for online monitoring of the pipes. The paper is titled “Chemical Vapor Deposition Graphene Based Resettable Sensor for Online Scale Monitoring.”

Samuel  Sofela, a student of Madsar Institute’s Microsystems Engineering program, presented the paper titled “Detection of Inert Gases by Electronic Variation Induced by Atom Collision with Carbon Nanomaterials Sensor.” Sofela described his team’s research to develop sensors with graphene sheets that can be used to detect gas in a vacuum.

PhD student Tuza Olukan also shared his research paper title “Exploiting Multi-Parametric Force Measurement to Map the Heterogeneity of Copolymers,” where the binding forces between molecules in sapphire and copolymers were analyzed.